There are three channels in the central channel, and the innermost channel is used by Kundalini to pierce through for the first time. You can imagine Kundalini to be made of many strands of energy tied together just like a rope, and as the chakras start opening more strands start getting awakened and they pierce through these six centers...

Dr. Waren has already talked to you about the different centers that we have within ourselves. And you can see how beautifully they are placed. And how gradually when the Kundalini rises, how She enlightens the innermost core of the centers.

There are three channels in the central channel, and the innermost channel is used by Kundalini to pierce through for the first time. You can imagine Kundalini to be made of many strands of energy tied together just like a rope, and as the chakras start opening more strands start getting awakened and they pierce through these six centers; but if a person after Realization just thinks that he has got the Realization, then he doesn’t have to bother about it, may lose it for the time being, for quite some time I should say, and he’ll have to work much harder to re-establish his Self-realization. I’ve seen many-a-times when we give Realization to people they say, “Yes, we have felt it.” They did feel it, everything happens, and then they lose it because they have not established their Realization properly, for which luckily in every place wherever I go I see to it that we already have a center established, then you can go to that center and you can learn from them how to establish your Realization. That is a very, very important time which must be taken into consideration.

There was a lady who had cancer, she was cured of her cancer, she was perfectly all right and she went back to her family, she was doing very well, and after some time – a year or so – she came back with another disease of a very serious nature. So I asked her, “How is it that you are cured of cancer, now you get another disease? Did you do anything about it?” “No, Mother, I went back from here, everybody says, ‘You are looking very fine.’ They are all right, they were all quite surprised how I was cured, and I never bothered to do anything about it.” So she got another trouble. You go on like this, you cure one thing then you again cure another thing. Like little children, you clean them, then again they get out and soil their clothes, again they are back in the bathroom, then again you clean them, again they do the same thing.

So you have to mature, after Realization you must in all wisdom and sensible behavior, you must mature of it, otherwise it is a big headache to Me and big headache to you, and you can be quite lost also with it, because if a seed is half-sprouted it is of no use at all. So if you want that you should really have the complete bliss of Self Realization, you have to become a little serious person about it. Shallow temperament is not going to help you, or looking at it as if like another guru shopping business it is not going to work out. You have to work to see that you establish yourself, till you have established you are not to work on other people but once you are established you can start working on other people, giving them Realization. There is no need then for you to bother that you will catch from others, or anything; but before that you should not try to help others. First help yourself, selfishness to begin with. Unless and until you are all right and you know all the methods of protecting yourself, you are not to indulge into Sahaja Yoga practices which helps others. But when you become an expert, when you have an expertise then you should do it. Like a mechanic who doesn’t know how to repair a car, they spoil it more. So better become an expert for which you don’t have to pay anything, you don’t have to do much about it but only to understand how you have to move the Kundalini within you, how you have to establish it back, what problems you have and how you have to cure. You will be surprised you won’t be aware of problems that you have.

One gentleman came and told Me, “Mother everyone is coming and asking me, ‘what about your father, what’s the problem?'” I said, “Everybody said the same?” He said, “Yes.” I said, “I also want to know, what about your father?” He said, “My father died very early in life, and I always had a feeling that I had no father.” That can be cured, and he developed asthma with it, so everybody knows, those who know one thing that is the truth about you.
All of them will say the same thing, even if it is a small child, he will also come and ask you that “Is your father all right?” Because if he knows that this center, this center on the right hand side means the father. So he will also say the same and then he will come and ask you, “what about your father?”

It is so remarkable sometimes the way people see these things that they can’t believe it, but this is nothing, what you get is just a wee bit of it.

But as Kundalini rises, on every center you start getting the light of that center. 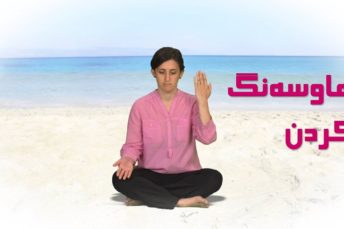